Check Availability Get a Quote
Uncategorized

A Beginner’s Guide to Your First Yoga Retreat

Part of going on a yoga retreat is letting go of control. Up until the moment you arrive, you’ve done everything you needed to do. You figured out what retreat to go on, how to get yourself there, the options for accommodations, and what to pack. Planning was the hard part, or the easy part, depending on what kind of person you are. If you’re the kind of person who loves letting go of control (which most of us aren’t) then the getting ready for the retreat part should have been a breeze. The real challenge comes the day the retreat starts, as you have to let go of your expectations and surrender to the process.

To make letting go and being in the moment during your yoga retreat easier for you when you get there, we’ve put together this beginners guide for you, below.

One of the best things you can do to get the most out of your yoga retreat at Pali is to set an intention before you go. Think back to when you booked the trip. What was going through your mind? There was something in you that spent the money with a goal in mind. That goal doesn’t have to be anything deep. Sometimes it’s just to get away from it all and to have some peace and quiet. Or maybe it’s something a little more in-depth, like committing to quieting down so you can hear your inner voice again.

Or maybe you just wanted to commit to your yoga practice and finally nail those inversion you’ve been working on for so long. Whatever the intention is, if you close your eyes and allow yourself to think without distractions, you’ll know what it is. There are no wrong intentions! 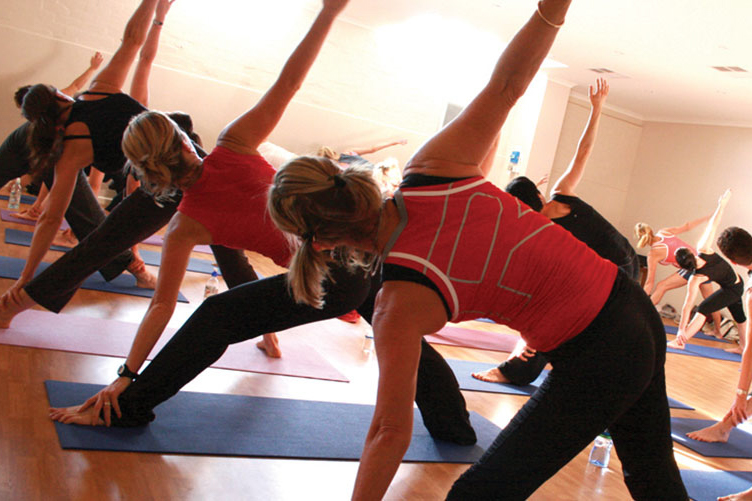 Yoga is supposed to be a relaxing and low-key activity. The worst thing you can do, when it comes to doing yoga in a group, is comparing yourself to other yogis. And by that, we mean comparing your practice (pose-ability), your body, or anything else you feel bad about.

And yes, we know that’s a lot easier to say than it is to do, but keep this mantra in your head, “Don’t compare your chapter 10 to their chapter 30”. You never know how long that person who can do all the headstand poses has been practicing, or if their internal motivation for getting those poses down is healthy or not. Maybe they pressure themselves daily to work on them because they don’t feel good enough at yoga if they don’t. When Theodore Roosevelt said “comparison is the thief of joy”, he was onto something. Allow yourself to be present for you – and don’t worry about anyone else.

If you know you have trouble with this, give yourself something positive to say when you catch yourself having judgmental thoughts. We like “I reject that thought and what it’s trying to make me feel”. Mantras are more powerful than almost anything else in the world – if you really believe.

3.) Bring Less Than You Think You Need

One of the best ways to stress yourself out before and during your retreat is by packing too much. As a grown adult, you only need one pair of underwear for each day, as well as one outfit. Pali’s campus is in the middle of the woods in the San Bernandino mountains and there’s no one out here to impress with your fashion sense. Wear what you feel comfortable wearing while doing yoga, not what would look like a “cute fit” to post on the gram.

Whether that means sports bras, baggy t-shirts, or booty shorts – only pack what will help you do your best practice and nothing else!

To piggyback off the last point, the last thing you want to be is too hot or too cold when you’re trying to concentrate on your breath and doing the pose to the best of your ability. We have a large number of venues at Pali, some are inside, some are outside, and some are inside with outdoor airflow. You want to make sure you have a hoodie you can throw off – or on, as needed. It’s very hard to concentrate on your downward dog when you can’t feel your extremities.

And speaking of things people often forget – pack your hair ties, right now! So many people forget something to put their hair up with, which makes inversions impossible. Of course, you could borrow from someone (as hair ties are the currency of female to female decency), but wouldn’t you rather be the one with enough to lend out?

That’s what we thought.

5.) Commit to the Experience

When you’re at your yoga retreat, do your best to really be in the moment. Try not to think about all the things you have to do when you get back or what people at home are doing. We mean this in the most loving way – you aren’t the center of the universe.

Your job and family want you to have this time for yourself, so commit to yourself so you can come back and be better for them.

The Number One Rule of a Pali Yoga Retreat: Have Fun!

There are no rules to yoga, perhaps other than to use your breath as a resource. But if there is a second one, it would be to have fun.

We don’t mean the type of fun where you’re squealing with excitement, but the kind of quiet joy that makes you smile without realizing you’re smiling. That’s the power of what taking time for yourself at Pali retreat can do – and we’re excited for you to share the experience!

Let Us Help You Plan A Trip to Pali Retreat

Pali is officially certified as a COVID-Compliant Business.

To demonstrate our commitment to health and safety, we’ve partnered with San Bernardino County to ensure that we are following the best safety guidelines and procedures available